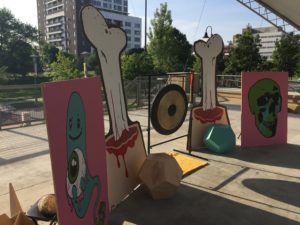 It was warm and getting warmer as a crowd of over 60 creatives gathered at Midtown Crossing for the latest installment of CreativeMornings, a global, breakfast lecture series. It was a beautiful opportunity to meet outside, with dogs and their owners playing catch in the park, and folks out walking, jogging, and generally enjoying the new day as we mingled.

Following the template of prior CreativeMornings in Omaha, Organizers Kim Sellmeyer and Steve Gordon got on the mic, welcomed all attendees, and got us up and moving with hi-fives and hugs. That got our blood pumping (coffee and rolls helped, too) and we were ready to hear Jason, the day’s presenter. 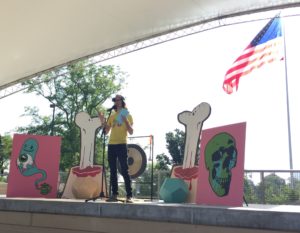 Jason Steady is plainly quite creative. He likes to make things, from music, travelling the country with his band, to fashioning wooden birds in Japanese Origami style, to countless other, non-traditional creations. Jason had never made such wooden origami creations before, but that didn’t deter him from taking on the project. He actually “invented” an angle-finder tool to make sure everything fit and looked right, but after coming up with his own, original tool, he then discovered “angle finders” were already available.  One of the Origami birds was 9’ tall and had to be dis-assembled to move. The smaller example he showed us was simply beautiful, with its angular wings and neck. Though he had never attempted such a commissioned art project before, he put his mind to it and succeeded!

He talked about the many sides of creativity, and not letting inexperience stop him from taking on new challenges. His advice was to seek out and talk to people who’ve done what you want to do, ask them lots of questions, then fearlessly just start creating. His smile, casual, easy-going presentation style, and quick wit convinced us all that Jason was onto something. Of the many steps he goes through while creating, the finished project seems to be less fulfilling to him than the creative process itself. Such are creatives… 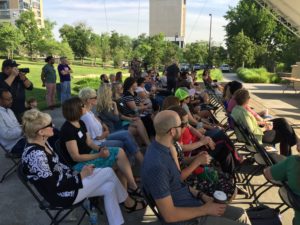